Whatever you have to say, leave
the roots on, let them
dangle

And the dirt
Just to make clear
where they come from.

We stand at an important moment in the flow of time, and what matters most now is that those who can, will stand together, not because there has to be agreement or even shared cause, but simply because of the necessity to stand together for the sake of humanity. While the economy may be getting better, for example, it is not getting better for everyone, especially those on the lower end. However, each one of us brings gifts and capacities to the world. When those gifts move in service to others, something new and valuable emerges in the spaces connecting us all—a view of community. I am not the only one thinking in this way. There are a number of ways that this impulse for recognizing the value of each human being is showing up in the world right now. Not without profound precedent. 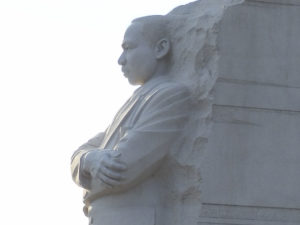 From the vantage of 2018 we can look back fifty years to painful markers of sea change: The assassinations of Martin Luther King, Jr. and Robert F. Kennedy, and June of 1968 saw the first Poor People’s Campaign. This event was an emanation of Dr. King’s economic program which he never lived to implement. 1968 also brought us the Chicago Democratic Convention during which the world became witness to an aspect of the American soul in which war protest was pitted against the power of the state. Violence and non-violence, war and peace, truth and the credibility gap, became part of a moral drama that Dr. King spoke to in his well-known statement from Beyond Vietnam:

We must rapidly begin the shift from a thing-oriented society to a person-oriented society. When machines and computers, profit motives and property rights, are considered more important than people, the giant triplets of racism, economic exploitation, and militarism are incapable of being conquered.

We can also look back one hundred years, to see that in middle Europe, Rudolf Steiner looked at the human devastation and economic chaos resulting from World War I. From this experience he articulated an approach to organizing society that aimed to eliminate the need for violence and control of resources, and at the same time lifted the human being as a valuable and engaged member of political and economic life. His vision, “The Threefold Commonwealth,” was precisely an imagination of a person-oriented society. While he could not have imagined what the sustained conflicts and racism in US society might look like fifty years hence, he knew that something had to change in how we work together as a society, or war and continued human suffering was inevitable. His efforts failed, despite his access to those in power.

Posted in John Bloom
← Newsletter from the Natural Science SectionHow do we imbue our thoughts with the warmth of the heart? →